The typical database contains many tables. Some smaller databases may have only a dozen or so tables, whereas other databases may have hundreds or even thousands. The common factor, however, is that few databases have just one table containing everything you need. Therefore, you usually have to draw data from multiple tables together in a meaningful way. To show data from multiple tables in one query, Oracle allows you to perform table joins.
Here are the two rules you need to remember for table joins. Data from two (or more) tables can be joined, if the same column (under the same or a different name) appears in both tables, and the column is the primary key (or part of that key) in one of the tables. Having a common column in two tables implies a relationship between the two tables. The nature of that relationship is determined by which table uses the column as a primary key. This begs the question, what is a primary key? A primary key is a column in a table used for identifying the uniqueness of each row in a table. The table in which the column appears as a primary key is referred to as the parent table in this relationship (sometimes also called the master table), whereas the column that references the other table in the relationship is often called the child table (sometimes also called the detail table). The common column appearing in the child table is referred to as a foreign key. 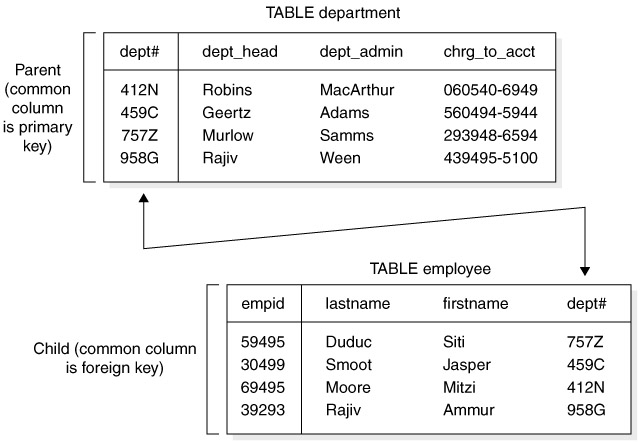 Join Syntax
Let’s look at an example of a join statement using the Oracle traditional syntax, where we join the contents of the EMP and DEPT tables together to obtain a listing of all employees, along with the names of the departments they work for:

SQL> select e.ename, e.deptno, d.dname
2  from emp e, dept d
3  where e.deptno = d.deptno;
ENAME     DEPTNO    DNAME
———-      ———     ————–
SMITH         20          RESEARCH
ALLEN         30          SALES
WARD         30          SALES
JONES         20          RESEARCH
Note the many important components in this table join. Listing two tables in the from clause clearly indicates that a table join is taking place. Note also that each table name is followed by a letter: E for EMP or D for DEPT. This demonstrates an interesting concept—just as columns can have aliases, so too can tables. The aliases serve an important purpose—they prevent Oracle from getting confused about which table to use when listing the data in the DEPTNO column. Remember, EMP and DEPT both have a column named DEPTNO
You can also avoid ambiguity in table joins by prefixing references to the columns with the table names, but this often requires extra coding. You can also give the column two different names, but then you might forget that the relationship exists between the two tables. It’s just better to use aliases! Notice something else, though. Neither the alias nor the full table name needs to be specified for columns appearing in only one table. Take a look at another example:
SQL> select ename, emp.deptno, dname
2  from emp, dept
3  where emp.deptno = dept.deptno;
How Many Comparisons Do You Need?
When using Oracle syntax for table joins, a query on data from more than two tables must contain the right number of equality operations to avoid a Cartesian product. To avoid confusion, use this simple rule: If the number of tables to be joined equals N, include at least N-1 equality conditions in the select statement so that each common column is referenced at least once. Similarly, if you are using the ANSI/ISO syntax for table joins, you need to use N-1 join tablename on join_condition clauses for every N tables being joined.

For N joined tables using Oracle or ANSI/ISO syntax for table joins, you need at least N-1 equijoin conditions in the where clause of your select statement or N-1 join tablename on join_condition clauses in order to avoid a Cartesian product, respectively.

Cartesian Products
Notice also that our where clause includes a comparison on DEPTNO linking data in EMP to that of DEPT. Without this link, the output would have included all data from EMP and DEPT, jumbled together in a mess called a Cartesian product. Cartesian products are big, meaningless listings of output that are nearly never what you want. They are formed when you omit a join condition in your SQL statement, which causes Oracle to join all rows in the first table to all rows in the second table. Let’s look at a simple example in which we attempt to join two tables, each with three rows, using a select statement with no where clause, resulting in output with nine rows:

SQL> select a.col1, b.col_2
2  from example_1 a, example_2 b;
COL1 COL_2
——— ——————————
1 one
2 one
3 one
1 two
2 two
3 two
You must always remember to include join conditions in join queries to avoid Cartesian products. But take note of another important fact. Although we know that where clauses can contain comparison operations other than equality, to avoid Cartesian products, you must always use equality operations in a comparison joining data from two tables. If you want to use another comparison operation, you must first join the information using an equality comparison and then perform the other comparison somewhere else in the where clause. This is why table join operations are also sometimes referred to as equijoins. Take a look at the following example that shows proper construction of a table join, where the information being joined is compared further using a nonequality operation to eliminate the employees from accounting:

SQL> select ename, emp.deptno, dname
2  from emp, dept
3  where emp.deptno = dept.deptno
4  and dept.deptno > 10;
ANSI/ISO Join Syntax (Oracle9i and higher)
In Oracle9i, Oracle introduces strengthened support for ANSI/ISO join syntax. To join the contents of two tables together in a single result according to that syntax, we must include a join tablename on join_condition in our SQL statement. If we wanted to perform the same table join as before using this new syntax, our SQL statement would look like the following:
Select ename, emp.deptno, dname
from emp join dept
on emp.deptno = dept.deptno;

Note how different this is from Oracle syntax. First, ANSI/ISO syntax separates join comparisons from all other comparisons by using a special keyword, on, to indicate what the join comparison is. You can still include a where clause in your ANSI/ISO-compliant join query, the only difference is that the where clause will contain only those additional conditions you want to use for filtering your data. You also do not list all your tables being queried in one from clause. Instead, you use the join clause directly after the from clause to identify the table being joined.
Never combine Oracle’s join syntax with ANSI/ISO’s join syntax! Also, there are no performance differences between Oracle join syntax and ANSI/ISO join syntax.
Cartesian Products: An ANSI/ISO Perspective
In some cases, you might actually want to retrieve a Cartesian product, particularly in financial applications where you have a table of numbers that needs to be cross-multiplied with another table of numbers for statistical analysis purposes. ANSI/ISO makes a provision in its syntax for producing Cartesian products through the use of a cross-join. A cross-join is produced when you use the cross keyword in your ANSI/ISO-compliant join query. Recall from a previous example that we produced a Cartesian product by omitting the where clause when joining two sample tables, each containing three rows, to produce nine rows of output. We can produce this same result in ANSI/ISO SQL by using the cross keyword, as shown here in bold: 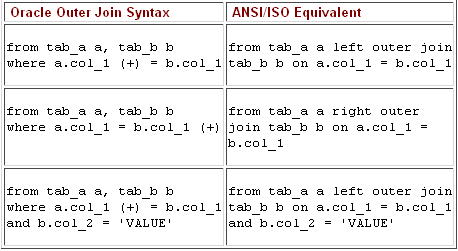 Want to join the discussion?
Feel free to contribute!

Having Clause in SQLUNION & INTERSECT
Scroll to top

We get it: Ads are not what you are here for. But these ads helps us keep the lights on, to pay our bills and keep this site up and running to provide unique and rare contents free for everyone with no limits.

Please consider disabling the AdBlocker just while you are browsing our site or putting us on your whitelist. You may not be aware, but any visitor supports our site by just viewing ads. Without you, we could not keep the site up as it is.

Thank you for understanding.