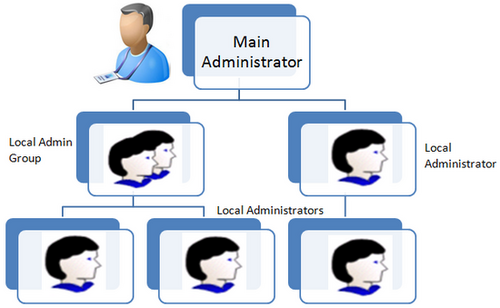 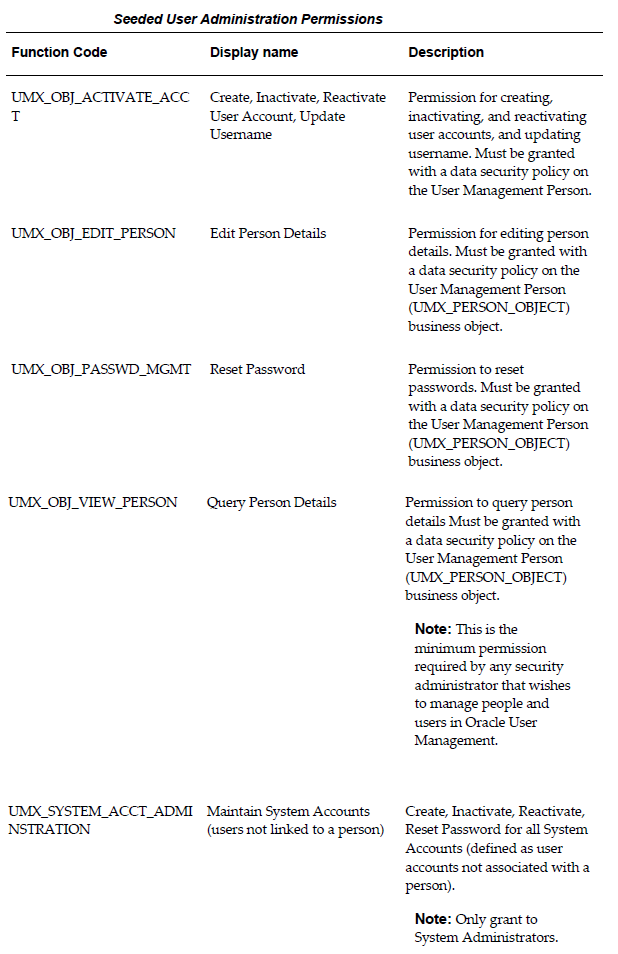 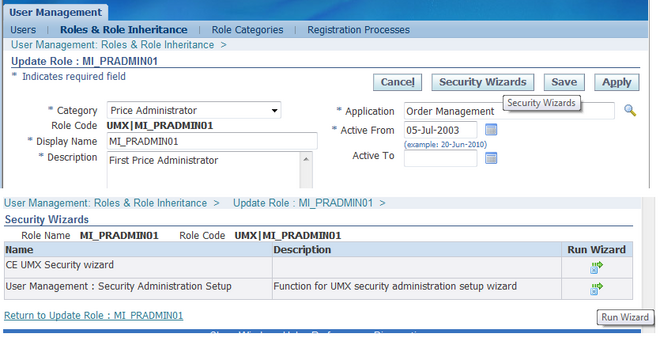 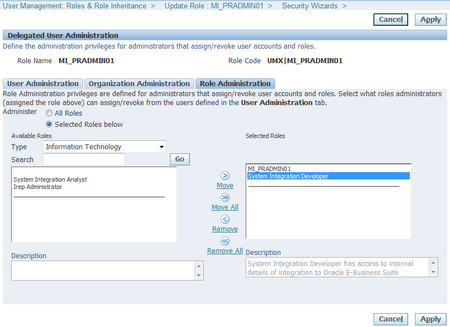 1. Log on as a user that is assigned the Security Administrator role (typically as sysadmin), select the User Management responsibility in the navigator and then click the Roles & Role Inheritance subtab.
2. In the navigation menu access the role for which you want to define role administration and click the Update icon.
3. Click on the Security Wizards button.
4. Click on the “Run Wizard” icon for “User Management: Security Administration Setup”.
5. Click the Role Administration link and use the Available Roles fields to search for the role(s) that you want to associate with this role and which administrators can manage once they are assigned this role.
6. Select the desired role(s), move them to the Selected Roles column and click Save or Apply.
Defining Organization Administration Privileges for Organizations 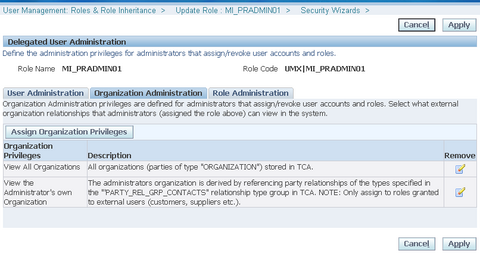 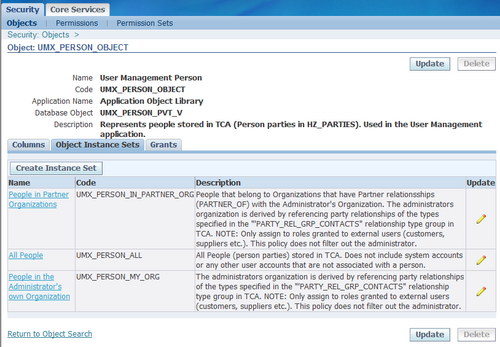 With Oracle Applications, organizations can use Data Security to manage permission assignments that control access to objects. Data Security policies can only be defined for applications that have been written to utilize the Data Security Framework. Access to the specific object must be formed with a specified Data Security Policy (also referred to as the Data Scope or Access Policy).
The Data Security Policy restricts operations so that they only can be performed on a subset of instances of the corresponding database object.
Steps
1. Log on as a user with the Functional Developer responsibility, click the Functional Developer responsibility in the navigator, navigate to the Security tab and then click the Objects subtab.
2. Search for and access the object for which you want to create data security policies.
For example, to locate the User Management Person business object (UMX_PERSON_OBJECT), enter “UMX%” in the Code field, click the Go button, and then click User Management Person object (UMX_PERSON_OBJECT) in the
search results list. For any object for which you are creating a policy, ensure that the SQL statement returns the primary key value for that object. In this example, this is a list of person party IDs.
3. Click the Object Instance Sets subtab. Click the Create Instance Set button to create a new object instance set or click the Update icon to modify an existing one.
4. Enter the required information and then click the Apply button. 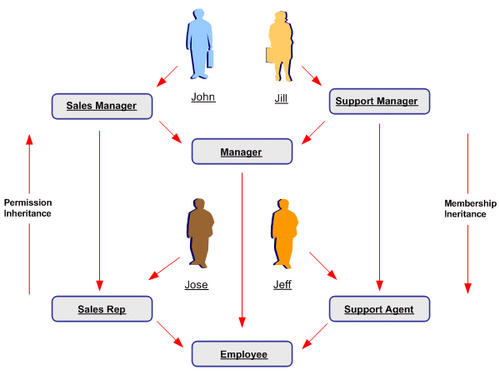 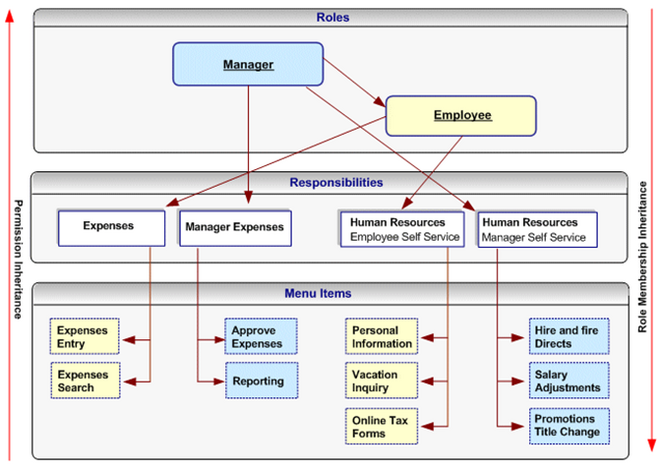 2.  Improved end user experience. In the applications navigator, end users will see a list of applications to which they have access. Access to the various functions within each application is determined by the roles assigned to the end user.
Steps
1. Define a new responsibility that will be used to represent a specific application such as Expenses or Human Resources.
2. Design a complete menu that includes all the menu functions within an application as well as any required submenus, and attach this menu to the new responsibility. For example, both the Expenses and Human Resources responsibilities would include all employee and manager menus.
3. Following the “principle of least privilege”, all the menu options within the application (each menu item corresponds to a function/permission) should be disabled by default. To accomplish this, remove the selection from the “grant” checkbox for each menu item.

Note: A user cannot access any of the menu items (functions) within the application if you assign the responsibility to the user at this stage.
4. Create roles representing the people with various job functions that require access to the application, for example, a Manager role and an Employee role.
5. Define role inheritance relationships. For example, the Manager role should inherit the Employee role, and the Employee role should inherit the Expenses and Human Resources responsibilities.
The following figure illustrates a role inheritance relationship in which a role inherits the responsibilities that are inherited by its subordinate role: 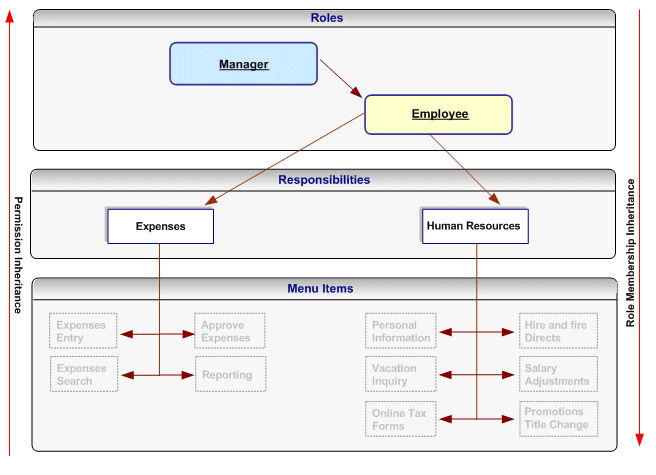 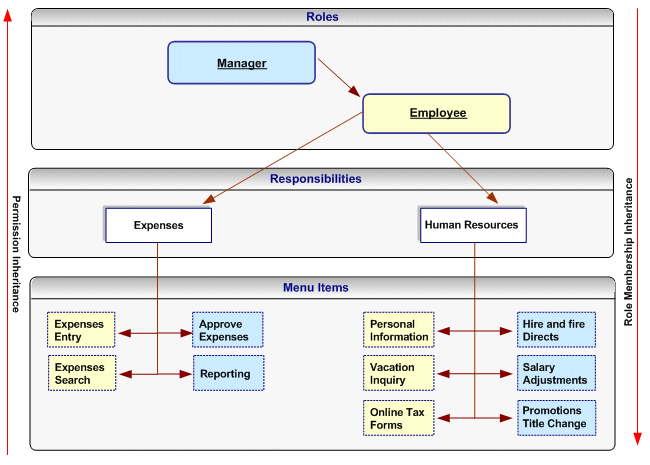 Permissions assigned to a subordinate role in the role inheritance hierarchy are automatically inherited by the superior roles. For example, if you grant the permission for accessing the Online Tax Forms page to the Employee role, anyone with the Manager role will automatically have access to this page through role inheritance. Because the Hire and Fire Directs page is only granted to the Manager role, it is not available to users that are only assigned the Employee role. Permissions are always assigned through permission sets, which represent named sets of functions (permissions). When determining what permissions (functions/menu items) should be granted to each role, you may have to create new
permission sets. Menus and permission sets are stored in the same tables  in the database; which means that they are interchangeable (both can be used) to assign permissions.
7. Optionally assign any additional permissions and data security policies to roles as required by each application. 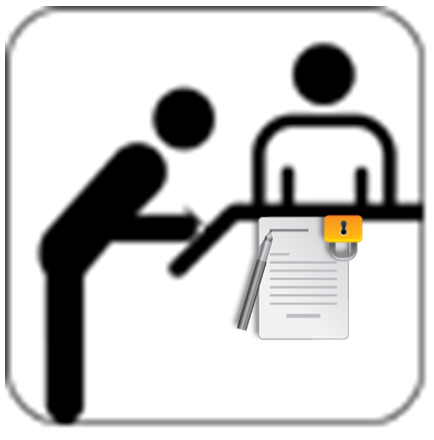 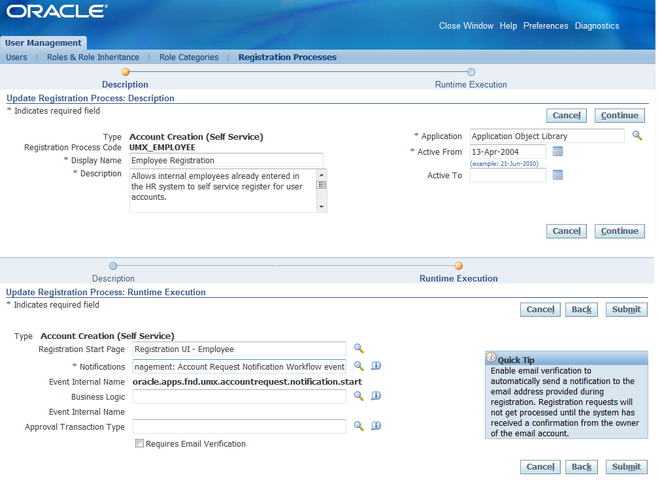 An user id should be created for each employee who needs access to the system. After an employee is created in HRMS, SYSADMIN logins to User Management and search for that employee by first and last name.
The sysadmin needs to enter the mail id and password (not mandatory, if not entered manually system generates a password). A mail is sent to the user with the log in credentials. Next the sysadmin can add the roles/responsibilities to the user as per the business requirements. 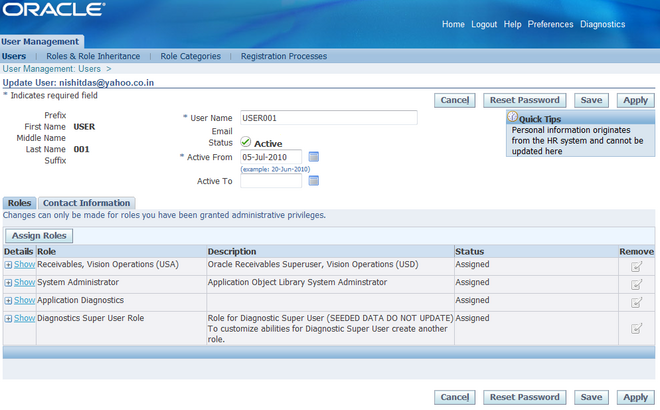 Configuring the User Name Policy
The Oracle User Management registration infrastructure supports a configurable user name policy. This policy is used to generate a suggested user name in the sample user creation flows shipped with the application, as well as for validating the chosen user name format.
Note: Oracle User Management is supplied with a default policy that identifies users by their email address.
Seeded User Name Policies
The following table lists the seeded user name policies that are shipped with Oracle Applications.

We get it: Ads are not what you are here for. But these ads helps us keep the lights on, to pay our bills and keep this site up and running to provide unique and rare contents free for everyone with no limits.

Please consider disabling the AdBlocker just while you are browsing our site or putting us on your whitelist. You may not be aware, but any visitor supports our site by just viewing ads. Without you, we could not keep the site up as it is.

Thank you for understanding.